All Categories
How To
Set up a Bastion Host
9

Set up a Bastion Host

When multiple VM instances are spun up in the portal, there arises a need to access these instances from the outside world, for example, from your computer. Allowing external access to all instances increases security risk and puts your infrastructure at risk. This is where the concept of a Bastion Host comes to the rescue.

A Bastion Host is a special instance within your infrastructure that is configured to be accessed from public networks. This instance is fortified from external attacks through specialized software and hardened configuration.

1. An instance that is publicly accessible with a Floating IP that servers as the Bastion Host

2. Another instance with a private IP that we will connect from the Bastion Host 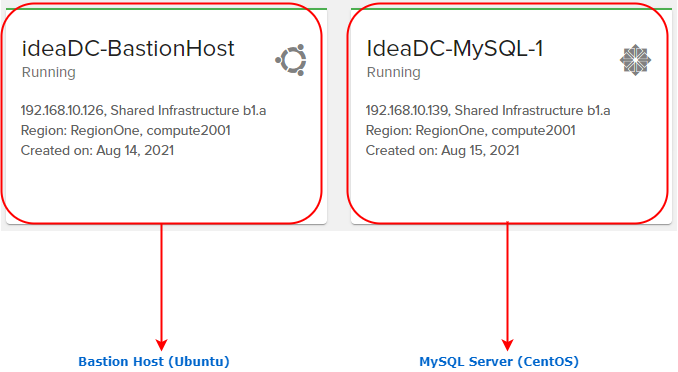 In this example, you will see how to set up MySQL on the private instance and access it from your Bastion Host instance. The MySQL Server would only be accessible from within the network using the Bastion Host and not from the Internet. In this example, we have used MariaDB, a fully open-source fork of MySQL.

Setting up the Bastion Host

Setting up a Bastion involves the following steps:

Refer to the Create an Instance article to know how to create a VM instance. This example uses Ubuntu 20.04 for the Bastion Host instance.

Create and Assign a Floating IP

A Floating IP is a publicly accessible that is associated with your instance, and it enables you to connect to the instance from your computer. Refer to the Create a Floating IP article for more information.

Make sure that a Floating IP is assigned with this instance:

3. Verify that a Floating IP is assigned to the Instance.

Create and Assign an SSH Key

An SSH key is used to connect to a VM instance from your computer through the Internet using the secure SSH protocol. Although you can connect to an instance with just a User Id and a Password without an SSH key, it is highly recommended that you use an SSH key as it the most secure way of connecting to your instances. 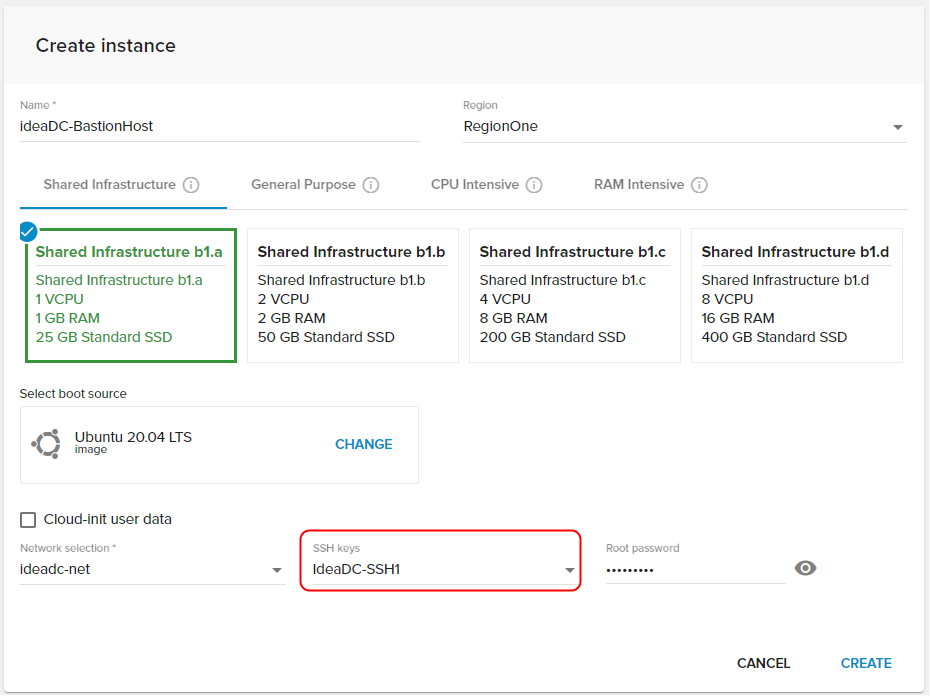 SSH is a secure connection protocol that allows you to access your instance from anywhere in the world through the Internet. To enable SSH access, you need to create a Security Group with SSH Port (22) added to the Ingress rule and the Security Group must be attached to the instance.

Setting up the Target instance

Refer to the Create an Instance article to know how to create a VM instance. This example uses CentOS 8 for the MySQL Server.

There is no special step needed to achieve this. Just make sure that no Floating IP is associated with this instance:

3. Verify that only a local IP is assigned and there is no Floating IP.

For this example, create a Security Group called IdeaDC-SG-MySQL. When a Security Group is created, it has two rules by default allowing all inbound and outbound traffic. Delete the inbound rule and add this new Inbound rule to allow only MySQL client requests from the Bastion Host subnet.

Login to the console from the Console menu on the instance, and execute the following commands to install MySQL.

To verify that MySQL is installed and running properly, try connecting locally:

If the installation was successful, you should see the MySQL prompt. Run the following commands to see the list of tables: 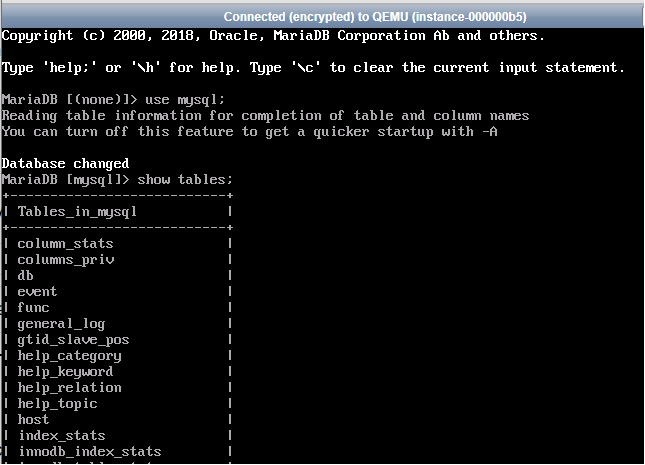 At this stage, you can only connect to MySQL from the local server. To enable connection from the Bastion Host, you need to grant privileges to the root user of the Bastion Host on the MySQL server by executing the following commands:

Note that the IP used is the local IP of the Bastion Host and not the Floating IP. The root user is used here is only to demonstrate the concept. In a real world setup, you should consider using a dedicated non-privileged user to access MySQL over the network.

Connect to the Bastion Host

You will now be able to connect to the MySQL Server by running the following command:

Was this article helpful?

0 out of 0 liked this article